An uncommon Advent: Snatching victory from the jaws of defeat

Editor's note: "An uncommon Advent: the arrival of a Savior in our lives" is a sampling of biblical meditations composed by members of the Concordia University Ann Arbor and Wisconsin community. It is our prayer that you will take time during the Advent season to read and reflect upon God's Word and await the coming of Jesus with newfound anticipation and zeal through the Holy Spirit.

December 17 – Snatching victory from the jaws of defeat

Then one of the elders said to me, “Do not weep! See, the Lion of the tribe of Judah, the Root of David, has triumphed. He is able to open the scroll and its seven seals.Revelation 5:5 (NIV)

If you root for a sports team, most likely you have had moments where it looked bleak for your team. Yet, just when all seemed lost, BAM, someone finds a way to snatch victory from the jaws of defeat. There have been some iconic sports moments of that variety: Duke’s Grant Hill passing to Christian Laettner for a miracle shot to beat Kentucky in the NCAA, Doug Flutie’s pass to the end zone for a Boston College win over the University of Miami, and Kirk Gibson’s walk off home run off the unhittable Dennis Eckersley for the Dodgers to defeat the A’s in the 1988 World Series among them.

In Revelation 5, we see a totally defeated apostle John who in his despondency is to the point of weeping. When it looks completely hopeless,out of nowhere, our Savior steps in for the ultimate victory. “The Lion of the Tribe of Judah, the Root of David,” are Old Testament Messianic references to Jesus as He is able to open the seals of the scroll and give us hope. The scroll represents God’s plan of salvation for all humans, and Jesus is the key.

Upon the opening of the seals in Revelation 5:9—much like a crowd erupts when there is a game winning play—we see those in heaven burst into a triumphant song. ALL of us believers in Jesus Christ can cheer this victory. Worthy are you to take the scroll and to open its seals, for you were slain, and by your blood you ransomed people for God from every tribe and language and people and nation(Revelation 5:9-10 ESV).

As we celebrate Advent, we anticipate the birth of our Savior, Jesus Christ.He is the Messiah who was foretold throughout the Old Testament and proved to be our hero in Revelation. Jesus Christ snatches the ULTIMATE victory from the jaws of defeat, and that victory is eternal life with Him in heaven. That is something about which we can rejoice, as this advent season represents a “winning season” for Christians worldwide. 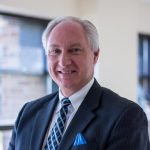 Dean Rennicke serves as the Vice President of the Foundation Board and has been at Concordia since 2017. View a full schedule of “An uncommon Advent” readings here.