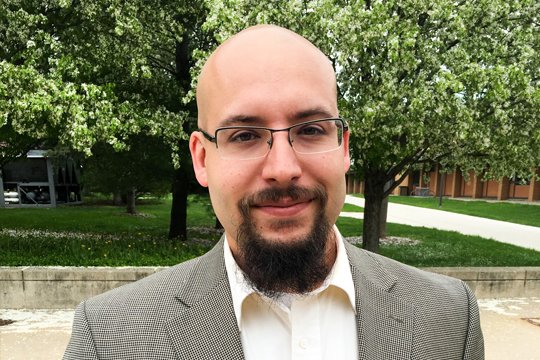 Bernard Elias, 35-year-old Frankenmuth native who now lives in Milan, had been working in the IT industry for about eight years when he began feeling unfulfilled.

“I was working for different IT companies throughout Ann Arbor, but something didn’t feel right. I knew I wanted to make a change and contribute to people in a different way,” said Elias.

Elias is a military veteran and served in the United States Marine Corps from 2002-2006. He was deployed on missions all over the world, including areas of Afghanistan, Iraq, Kuwait, and Albania. As a veteran, his GI bill presented him with an opportunity to go back to school.

So, back to school he went.

“I have always helped my kids with their homework and would give them lesson plans during the summer,” he said. “I very much enjoyed that and knew that being a teacher was something I could love.”

In 2014, Elias was deciding between Concordia University Ann Arbor and Eastern Michigan to pursue his new field of study. There was something that CUAA could give him that no other university in the area offered.

“It’s a Christian education,” said Elias. “I’m going to be a public school teacher, and I wanted to arm myself with a strong, Christian curriculum before I head out into the world. I have strong Christian ideals, and I did not want to fill my head with things I knew in my heart were not true.”

Shortly after commencement, Elias and his family will move from Milan back to Frankenmuth where both he and his wife were raised. He will begin his new career with a student-teaching semester in the fall and become a full-time secondary education social studies educator next spring.

Elias has five children, and he always finds ways to give them impromptu history lessons.

“Growing up, history and government were some of my least favorite subjects. I always dreaded them!” said Elias. “Now I love them, and I’m going to make sure my students do, too. I want social studies classes to be a part of their day they look forward to.”

Elias will walk across the stage at Concordia’s commencement ceremony on Sunday, May 15. Elias’ first-ever pupils, his five children, will be there to cheer him on.