The arrival of a Savior for all: A peace which passes all understanding

Editor's note: "A pandemic advent: the arrival of a Savior for all" is a sampling of biblical meditations composed by members of the Concordia University Ann Arbor community. It is our prayer that you will take time during the Advent season to read and reflect upon God's Word and await the coming of Jesus with newfound anticipation and zeal through the Holy Spirit.

December 20 – A peace which passes all understanding

I am native Chaldean from Iraq. I came to the U.S. with my husband and son in 2012 to pursue my PhD. In the summer of 2014, we decided to make the trip to Iraq to spend the summer with my mother and father-in-law. We were very excited and happy to enjoy the summer with family and friends back in Iraq.

In the beginning, everything went well until June 10, 2014, when our world turned upside down. Our trip become a nightmare when ISIS attacked and controlled Mosul (the center city of the Nineveh plains). ISIS attacked the Christians in Mosul, and gave them three choices: convert to Islam, leave Mosul without taking anything, or die by sword. Almost all Christians started to leave Mosul toward other cities in the Nineveh plains. ISIS created checkpoints around Mosul to prevent Christians from taking their belongings; and they seized their cars, money, and even medicine of the elderly.

Those who could not escape ISIS were either killed or abducted. More than 4,000 women and children were sold as slaves. On August 3, 2014, ISIS attacked and controlled another city called Telkef (a Christian town), which was very close to our town of Alqosh. On that day, we fled to a small village on the border between Iraq and Turkey and stayed there until we got our visas to return to the U.S. Throughout that hard summer, a belief that our powerful and everlasting God would never leave us was the only thing that brought us peace. As He said in Isaiah 41:10, So do not fear, for I am with you; do not be dismayed, for I am your God. I will strengthen you and help you; I will uphold you with my righteous right hand.

My friends, trust the Lord with all your heart, He will always protect and guide you as He reminds us in Isaiah 40:29-31, Even youths grow tired and weary, and young men stumble and fall; but those who hope in the Lord will renew their strength. They will soar on wings like eagles; they will run and not grow weary; they will walk and not be faint. 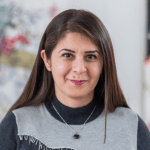 DR. FARAH KAMW is an Assistant Professor of Computer Science and has served at Concordia since 2020

View a full schedule of “The arrival of a Savior for all”  readings here.