Treat your loved one to a special afternoon Ann Arbor’s own Downton Abbey-style mansion, the historic Earhart Manor at Concordia University Ann Arbor.

Editor’s note: While originally scheduled for Saturday, February 12, 2022, the planning committee has decided to postpone this event to a later date in spring 2022 to keep attendees safe from the spread of COVID-19.

“Downton Abbey Valentine’s Tea” will include a British-style afternoon tea, hors d’oeuvres, decadent desserts, and music. Attendees will have the chance to explore the period-style rooms throughout the historic Earhart Manor. Guests are welcome to wear Downton Abbey-inspired attire.

Hosted by members of the Concordia Guild (dressed Edwardian period-style themselves!), this “Downton Abbey Valentine Tea” will raise funds for the Earhart Manor Endowment, established to preserve Ann Arbor’s own Downton!

Interview about “Valentine Tea” on The Lucy Ann Lance Show 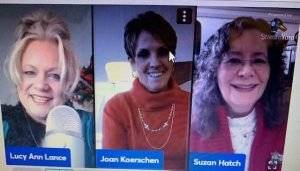 *Note, this interview took place on December 21, 2021, before the decision was made to postpone the event from February 2022 to a later date.

Stay in-the-know on this event!

Want to stay in the loop on the new date? Email ConcordiaGuild@cuaa.edu or call (734) 995-7509 to be added to event correspondence.

More about the historic Earhart Manor in Ann Arbor

“Not too many in Ann Arbor lived such a life,” says Molly Hunter Dobson of her great-aunt and great-uncle, Carrie and Harry Boyd Earhart. The Earharts’ 400-acre estate along the Huron River included a small golf course for “H. B.” to practice his swing, forty acres of woods where he went horse­back riding, and formal gardens and a greenhouse where Carrie indulged her love of flowers. Today, most of the estate has disappeared, swallowed up by Concordia College and the Waldenwood subdivision. But the stone-walled mansion the Earharts built in 1936 still stands on Geddes Road near US-23.

Read the complete origin story of the historic Earhart Manor.

Ways to Give to the Earhart Manor Endowment

Concordia University Ann Arbor and the Concordia Guild remain committed to respecting the character of the building. An endowment was created for the historical preservation and upkeep of Earhart Manor.