Inspired Design: The symbolism of The Chapel of the Holy Trinity

This story first appeared in the spring 2020 issue of the Arbor Light, the official magazine of Concordia University Ann Arbor.

The Chapel of the Holy Trinity packs a walloping figurative punch. Woven into the fabric of the CUAA campus’ crown jewel is the symbolism of God’s almighty provision, Christ’s undeserved sacrifice, the Holy Spirit’s sustaining presence—and how they ignite us to give glory through our studies, our work, our lives.

RELATED: THE FORMATIVE YEARS—THE ARCHITECTURE OF THE CHAPEL OF THE HOLY TRINITY IS DELIBERATE IN ITS INTENTION FOR CONCORDIANS

Below, a few of the building’s features are explained.

The Architectural Form of the Chapel

The unique triangular shape, symbolic of the Holy Trinity, sets the chapel apart from other buildings. The north-facing plane provides a unifying axis that ties the principal elements of campus together, while the apex (which contains the altar) points symbolically outward toward the world ahead for the students. The interior is a single space, typifying the priesthood of all believers. 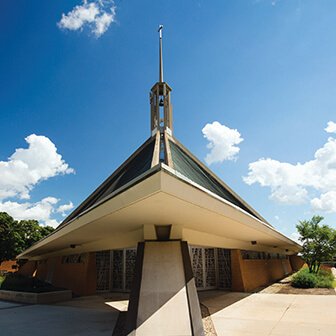 The altar, pulpit, and lectern each bear a symbolic inscription: “IC XC NIKA (Jesus Christ Conquers),” the text of Psalm 85:8, and the text of John 14:23, respectively. The pulpit’s missal stand features a burning bush (like Moses, God speaks to us through His Word and preaching), while the lectern features a ship, an early symbol of the Holy Christian Church (as the Church is like Noah’s ark, a safe ship in life’s storm).

Created by Nate Harris (’19) and commissioned by CUAA’s Student Government Association, the newest addition to the chapel is typically placed in the center of the nave, where the aisles merge, to represent baptism’s central part in all believers’ faith journey. Harris says his goal was to incorporate the aesthetic of the chapel in the design and reflect the symbolism. 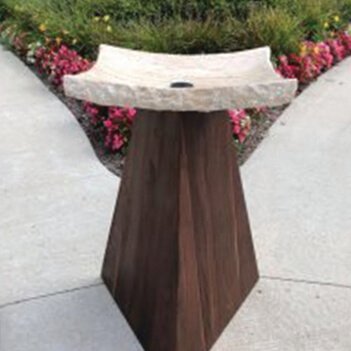 One of three scenes depicting the obedient Christ carrying out the ministry assigned by His heavenly father, the stained glass behind the altar shows the triumphant Lord clad in the raiment of His kingly, priestly, and prophetic offices. Christ is the one who ever lives to make intercession for those whom He has redeemed with His blood. In His hand He holds the scroll of the elect, the sum total of those whose names are written in the Book of Life. 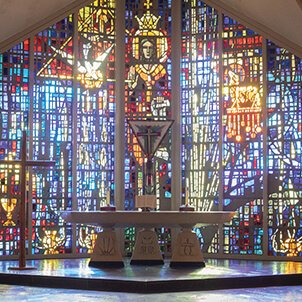 The east portal shows the obedient Christ in the moment of His baptism by John, while the west portal depicts the Great Commissioning. At commencement each year, CUAA students symbolically enter via the east entrance and exit through the west to remind them of the Lord’s command to “Go therefore and make disciples of all nations.” 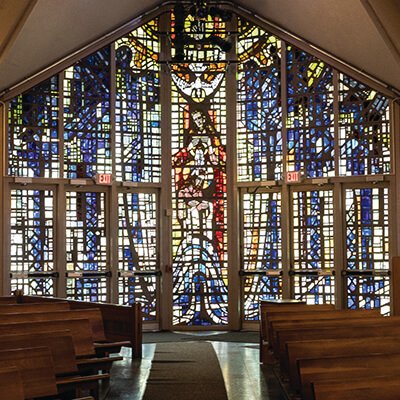 Throughout the chapel, the clerestory windows (the high, skinny glass) show the Liberal Arts in the service of the Church. The north clerestory windows present the fine arts, the east windows point to the social sciences, and the west windows honor the natural sciences. All of the stained glass was produced by the studio of Gabriel Loire of Chartres, France. 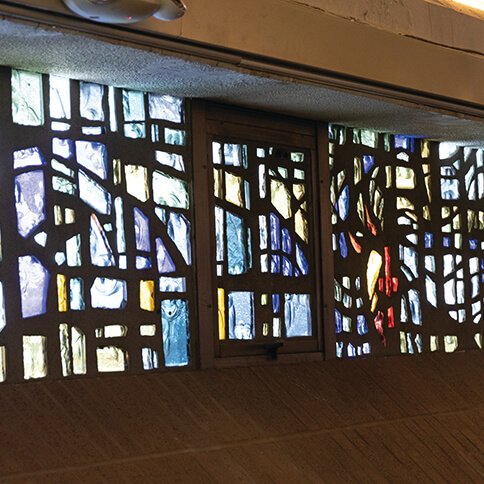 The Schlicker Organ Company, Inc. of Buffalo, New York, built the 1967 organ, which consists of three manuals, four divisions, 34 stops, 46 ranks, and 2,525 pipes. The organ pipes rise dramatically to one of the roof planes, forming a striking counterpart to the chancel. 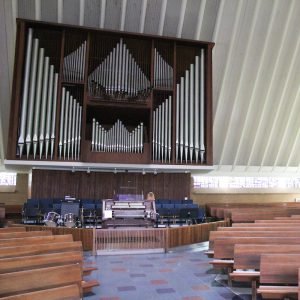 —The spring 2020 Arbor Light hit mailboxes the beginning of October. View a PDF version of the magazine here. If you are not on our mailing list, but are interested in receiving a free copy, email Jennifer.Hackmann@cuaa.edu.

Athletic Training program at Concordia University Ann Arbor earns accreditation
previous story
The formative years: The architecture of The Chapel of the Holy Trinity is deliberate in its intention for Concordia
next story