The formative years: The architecture of The Chapel of the Holy Trinity is deliberate in its intention for Concordia

This story first appeared in the spring 2020 issue of the Arbor Light, the official magazine of Concordia University Ann Arbor.

Concordia University Ann Arbor may look a lot different than it did in 1962 when stakeholders broke ground on a brand-new campus at 4090 Geddes Road. Since the merger with the Wisconsin campus in 2013, the university has added more than a dozen new programs, undertaken significant facility renovations, and celebrated a student count beyond any enrollment record ever seen before in university history.

And yet much is still the same.

Concordia’s inaugural building, The Chapel of the Holy Trinity, set the tone and function for the campus, and remains a powerful visual reminder of the university’s focus today. Intentionally situated at the center of the main campus, the chapel rises to a height of 62 feet; its spire with a cross atop adds another 45 feet and can be seen from nearly every vantage on campus. The chapel’s cornerstone bears a vital reminder: “That in all things Christ might have preeminence.”

This foundational charge has had staying power for Concordia. CUAA students are testaments of that fact. While individuals from all walks of life and at all points in their faith journeys come to Concordia, time and again they leave with a deepened Christian worldview and greater appreciation for what it means to be a servant of Christ in their future vocations.

RELATED: INSPIRED DESIGN—THE SYMBOLISM OF THE CHAPEL OF THE HOLY TRINITY 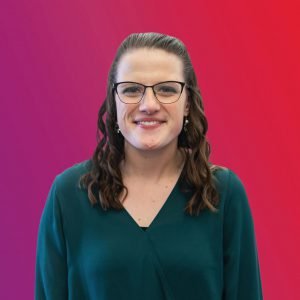 Becky (Sarver) McCracken had a list of “must-haves” when she began her college search. Any school that would give her the chance to play softball at the collegiate level would receive a fi rst look, and she needed a school that offered a special education major with strong fi eld experiences. Something near her boyfriend (now husband), Mackenzie, who was enrolled at the University of Michigan at the time, was icing on the cake.

Nevertheless, Concordia checked all of her other boxes, and in 2016 she found herself recruited, enrolled, and ready to step foot on the Lutheran-rooted campus.

It’s not that Becky was turned off by religion. She simply never had anyone encourage it before. Even though he didn’t identify as an atheist, her father, in particular, would quickly shut down any conversations about God.

At Concordia, she became immersed in an entirely different culture. Her team regularly attended chapel, and her professors eagerly tackled subjects from a Christian worldview. Midway into her junior year, Becky attended Daily Chapel to fulfill an assignment for her requisite Christian Faith class. Campus Pastor Randy Duncan delivered the message that day. The Holy Spirit worked through Pastor Duncan’s message to spark faith in Becky as he encouraged students to resist the urge to bear life’s burdens themselves.

“I remember him saying, ‘There’s a reason God is our Savior,’ and that really resonated with me. I’ve struggled with anxiety my whole life, and I remember thinking, ‘Wow, you’re right. I don’t have to put everything on myself,’” Becky said. “I walked out of chapel and texted my fi ancé and said, ‘I think I want to start going to church.’”

“It just kind of took off from there,” Becky said. “We felt like it was home. We wanted to express our faith and be welcomed into God’s family.”

Ahead of their July 20, 2019, wedding, Becky and Mackenzie were baptized at University Lutheran Chapel.

“It was the public expression and confirmation of my faith—connecting with God through the Holy Water and washing away of my sins,” Becky said. “I’m thankful to Concordia for helping me fi nd my place among His people.” 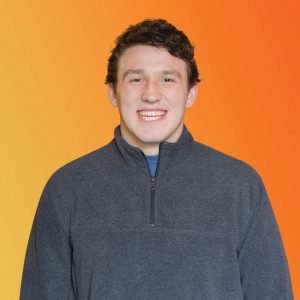 It’s hard not to root for Alex Hinojosa. In virtually everything he does, the standout CUAA scholar-athlete reflects the blue-collar work ethic and Christian values in which he was raised.

Already in his sophomore year, Alex has contributed significantly to the success of a young Cardinals football program. During his introductory year at CUAA, he helped the team fi nish the season with a 10–3 record that included an NAIA Football Championship Series quarterfi nal appearance. In his sophomore season, the likeable defensive lineman was named Defensive Player of the Week two weeks in a row, first by the Mid-States Football Association Mideast League and then by the National Christian College Athletic Association.

Yes, it’s easy to cheer on a talented athlete with a good head on his shoulders, but his family, friends, and the Concordia community are rooting for Alex for an entirely new reason as of late: Alex has realized the call to become a Lutheran pastor.

It took a full year of testing the waters with various majors before he arrived at the preseminary track—first mathematics with the intent to become a civil engineer, then nursing, and then back to mathematics. The summer after his freshman year, Alex still felt lost. He reached out to Vice President of Administration Rev. Dr. Ryan Peterson and, after a heartfelt and honest conversation, Alex felt at peace.

“I felt this overwhelming sense of relief once the decision was made,” Alex said. “It’s kind of funny because everyone gets really, really happy when they hear I’m going to become a pastor. They’re all really enthusiastic about it.”

Had he not been at Concordia, Alex’s career trajectory likely would have looked much  different.

“You get a different experience with your faith at Concordia because you always have that encouragement on you,” Alex said. “Whatever I ended up doing, I know I would have been honoring God, but I’m so happy that Concordia did have that influence on me because not only is becoming a pastor God-pleasing, it’s genuinely what I want to do with my life.” 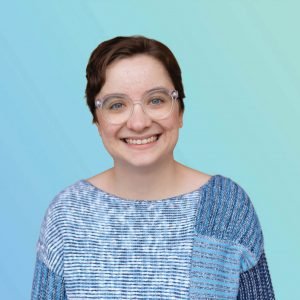 Concordians regularly cite move-in day as one of their fondest times of the year. The excitement of the day is palpable as belongings are hauled into students’ home-away-from-home, and parents’ pride is put on full display. For most, move-in day brings the anticipation of good things to come.

For Rachel Olson, however, her sophomore move-in day was a stark reminder of what she had recently lost. Just months before her return to campus, her father, a pastor at First Lutheran Church in Charlotte, Michigan, tragically died in an auto accident. A distracted driver had run a four-way stop.

The loss upended Rachel’s sense of security and identity, and forced her to reckon with her faith in a way she had never done before.

“I loved being a pastor’s kid growing up. For so long, that was who I was,” said Rachel, who will graduate in 2021 with her bachelor’s in family life and minor in youth ministry. “This past semester was very tough, and I struggled a lot, but at the end of it God showed me that He’s the only one who can provide me true security. My identity is in being a child of God.”

Worship opportunities at Concordia, several of her professors, and a close-knit group of Christian friends at CUAA helped remind her of that truth time and again throughout the year.

“It’s sometimes hard to praise when you’re in the midst of the hardships, but it definitely focuses you on Christ,” Rachel said, “and Concordia just kept putting those opportunities in front of me in the best way possible.”

Even through the pain and wilderness of her grief, Rachel has been able to clearly see how God has used the results of the accident for His glory. Most notably, the woman involved in the crash has come to faith in Christ. And Rachel, with Concordia by her side, has begun to heal.

“Concordia is not just a place where I go to school,” said Rachel. “I have brothers and sisters in Christ with me every day, and they share with me in my rejoicing and in my suffering. Concordia has been a place of safety.”

—The spring 2020 Arbor Light hit mailboxes the beginning of October. View a PDF version of the magazine here. If you are not on our mailing list, but are interested in receiving a free copy, email Jennifer.Hackmann@cuaa.edu.

Inspired Design: The symbolism of The Chapel of the Holy Trinity
previous story
You can't miss it
next story