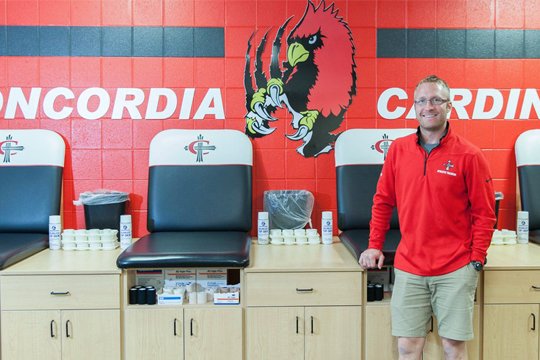 Dan Meier goes by many names: loving husband, doting father, devoted brother and son, and dedicated and congenial athletic trainer. All are great titles, but there’s one more title he’s hoping to secure—Ironman.

Meier, 31, has set his sights on the finish line of the July 23 Ironman Triathlon in Lake Placid, New York, a competition that is considered by many as one of the most difficult one-day sporting events in the world. The race consists of a 2.4-mile swim, 112-mile bike, and 26.2-mile run with a strict race completion time limit of 17 hours.

“I’ve been competing in triathlons for a number of years, but an Ironman is the ultimate test for triathletes,” said Meier, head athletic trainer at Concordia University Ann Arbor and member of St. Matthew Lutheran Church in Walled Lake, Michigan.

Even more than another athletic notch on his belt, this race represents another journey for Meier—the arduous course of those who have suffered from multiple myeloma.

Meier has dedicated his Ironman to support Multiple Myeloma Research Foundation (MMRF), a charity partner of the Ironman Lake Placid and the leading private funder of multiple myeloma research. Multiple myeloma is the second most common form of blood cancer and has one of the lowest five-year relative survival rates of all cancers.

“I don’t have the same gifts as medical researchers, but God has given me athletic talents and abilities that I can use to His glory,” said Meier. “The same way I need support to get through an Ironman, MMRF needs support to continue their research and find a cure.”

“Being a part of a greater purpose gives me hope in the long, gruesome hours of training, and will give me hope to reach the finish line on July 23,” said Meier. “My prayer is that supporting MMRF in their research to cure cancer also gives hope to people that have been directly affected by this disease. They are the true ‘Ironmen.’”

In early September, Meier decided to join the MMRF Team for Cures, and he has since heard from various people in his life who have been impacted by multiple myeloma.

“A couple of close high school friends from Mayer Lutheran in Minnesota reached out to me when they saw I was doing this. One had a family member pass away from multiple myeloma, and the other friend’s father-in-law was recently diagnosed with it. It gives me all the more motivation to be a part of finding a cure,” said Meier.

Meier’s official training schedule for the Lake Placid Ironman began on Dec. 26, 2016. At the height of his training, around May and June, Meier will be logging upwards of 20 to 30 hours a week.
Despite the training that is required, ‘real life’ doesn’t stop.

There have been many laps swum at 5 a.m., bicycle training rides that double as commutes to and from work, and long runs on the weekends so that he can still fulfill his duties as an athletic trainer, husband and dad.

“I don’t have the same gifts as medical researchers, but God has given me athletic talents and abilities that I can use to His glory,” said Meier. “The same way I need support to get through an Ironman, MMRF needs support to continue their research and find a cure.”

“As iron sharpens iron, so one person sharpens another.” Proverbs 27:17

After months of intense training, Meier will partake in the ultimate test, striving toward the envied words every triathlete is waiting to hear at the finish line: ‘Dan Meier, you are an Ironman!’

But those who know him best would say he already is.