“Blessed to be able to function in faith”: A CUAA nursing student blends faith and practice

As a teenager involved in madrigal choir at John Glenn High School in Westland, Michigan, it was tradition for Marquida Mobley and her peers to sing “Old Irish Blessing” at pivotal moments: The start of a new season or the ending of one; basking in the glow of a win at competition or reflecting upon a defeat; to mark a closing or to celebrate a new beginning.

Unsurprisingly, the song stuck with her into adulthood.

In 2013, she began a job as a Certified Nursing Assistant with Select Specialty Hospitals, a long-term acute care organization that has facilities nationwide, and then graduated to a case manager assistant with the organization. For eight years Mobley held down shifts at Select Specialty’s Gross Point location. Among her responsibilities was preparing the deceased for transfer to the morgue.

“It wasn’t easy initially,” Mobley recalls. “But I recognized what a sacred moment it was…and so I began to incorporate a prayer and ‘Old Irish Blessing’ into my routine.”

Now a student at Concordia University Ann Arbor, Mobley recently employed the song once again – this time, at the conclusion of a recent simulation exercise with her nursing classmates.

The result was an incredibly moving, impactful, and faith-filled experience for all those involved.

On Feb. 10, Mobley and classmates arrived at “Med Surg III” prepared to engage in a simulation exercise – i.e. A hands-on learning activity deliberately designed to mimic the high-stakes environment of a clinical setting (just without the real-life patients) so that students can experience the lessons in a controlled environment and engage in discussions post-experience to enhance their learning.

Related: Vital to the operation – CUAA nursing’s excellence in simulation

All of the pre-learning and assignments suggested the students would need to replace a battery on his pacemaker on “Dr. Don Campilo” (who was actually a high-fidelity manikin). The students were familiar with Dr. Campilo’s story from previous semesters:

74-year-old retired pathologist who cares for his wife, Lily, who suffers from Alzheimer’s. Married for over 51 years. Had a son who passed away in an auto accident. Received a pacemaker several years earlier and was overdue for a battery replacement, which had been delayed because he was caring for his wife. In need of post-op resources and support to avoid caregiver fatigue. 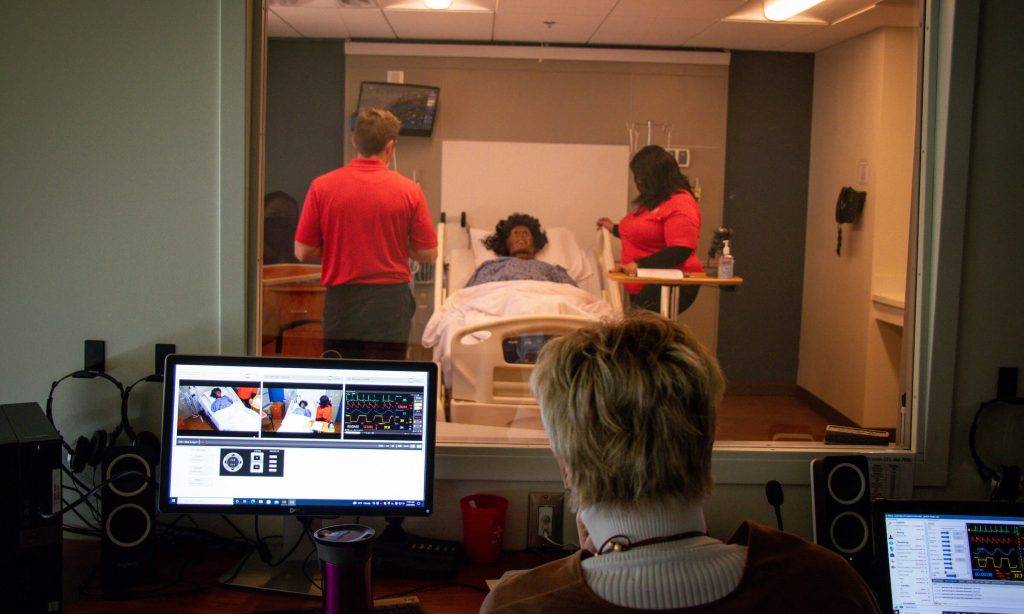 “Honestly, we thought we had it all covered,” Mobley said.

But then Dr. Campilo went into cardiac arrest. The CUAA nurses-in-training successfully called a code, but after 20 rounds of CPR, “a doctor” called his time of death. Suddenly, the students’ efforts turned to that of post-mortem care.

“I think it caught us off-guard,” said Mobley. “There were tears. It was very emotional.”

As the group began to verbally dissect the exercise, Mobley offered up her approach from her days as a CNA for the group’s consideration.

“My classmates and I, we joined hands and had a silent moment of prayer. Then I sang,” said Mobley. “It was very emotional for so many reasons, but mainly, it became apparent that, yes, this is simulation, but this is also a part of our life. This is our futures with our nursing careers. We’re going to have to help someone do this.

“The Lord has us at Concordia for a reason,” Mobley continued. “We’re blessed to be able to function in our faith. I believe that even though the manikin wasn’t real, we will remember that lesson.”

Faith in the classroom and at work

Mobley isn’t a typical undergraduate student. As a mother to a 25-year-old daughter and a 16-year-old son, Mobley is starting her undergraduate degree at a later stage than most.

Her first degree was an associate’s degree in communication; however, she always felt the pull to become a nurse. After having the privilege of being invited to support some of her friends from church through labor and delivery, Mobley decided she would take the bold step to pursue her nursing degree.

Ultimately, the Lord led her to Concordia.

“I feel like the Lord blessed me because now I’m at a faith-based college where my professors know me by name and I really feel supported.”

And, in turn, Mobley has been a support to her classmates.

“It’s a true blessing to know that when I started, I had classmates who didn’t believe in God and now we’re getting together to pray before class,” Mobley said. “It feels good to witness them progress from that place of darkness into the Light.”

Earn your Bachelor of Science in Nursing from Concordia Ann Arbor. Click here to learn more.