Concordia Vespers to feature Arborsong and The Boychoir of Ann Arbor 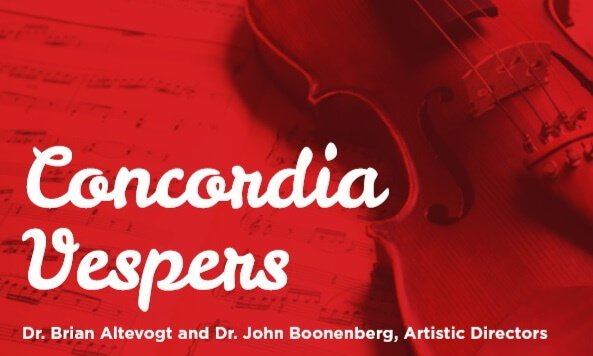 This historically sensitive and timeless worship begins at 5 p.m. and features Concordia University’s Arborsong, The Boychoir of Ann Arbor, a community chorus, a full string orchestra and soloists.

Under the artistic direction of CUAA’s Dr. Brian Altevogt and Dr. John Boonenberg, the service will also feature the Michigan premiere of a work written for David Cherwien and the National Lutheran Choir, The Holy Spirit Mass. This piece was composed by Kim Andre Arnesen to commemorate the 500th anniversary of the Reformation in October, 2017. Its text is taken from Martin Luther’s well-known hymn, Come Holy Ghost, God and Lord, along with the Ordinary of the Mass.

Arborsong is a select, chamber choir directed by Dr. Altevogt that consists of auditioned members from the Concordia Choir, while The Boychoir of Ann Arbor is a community-based, not-for-profit group of boys aged 8-18 who love to sing.

A freewill offering at the door will support Concordia University Ann Arbor’s music department, along with the semiannual Concordia Vespers.