Moments of Boar’s Head: An ode to the tradition

The Boar's Head Festival at Concordia University Ann Arbor is an annual tradition that members of the Concordia community near and far look forward to each December, professing the wonder of the Christmas miracle.

The moving spectacle, which started in 1978 thanks to the vision of professors Paul Foelber, John Sturmfels and Quentin Marino, enacts medieval Christmas traditions and the story of Christ’s birth.

A treasured memory for many people, this vibrant and living tradition will be missed by many this Christmas season because of the limitations of the COVID-19 pandemic.

With quick thinking and fast action, audio was captured at the final in-person Concordia choir rehearsal on Nov. 17, 2020, capturing parts of the soundtrack of Boar’s Head that so many know and love.

May this audio not only enhance your holiday cheer, but also stir within you Advent anticipation of the fulfillment of all of God’s promises in the gift of Jesus.

Music from the Boar’s Head Festival, under the direction of Dr. Brian Altevogt, CUAA Director of Choirs.

Moments of the Boar’s Head Festival

Many, like myself, are missing gathering as a community this weekend to celebrate the Boar’s Head Festival.

In reflection, we’re taking a look at significant moments from recent years of Boar’s Head, a celebration that has been a part of Christmas festivities on Concordia’s campus for over four decades. 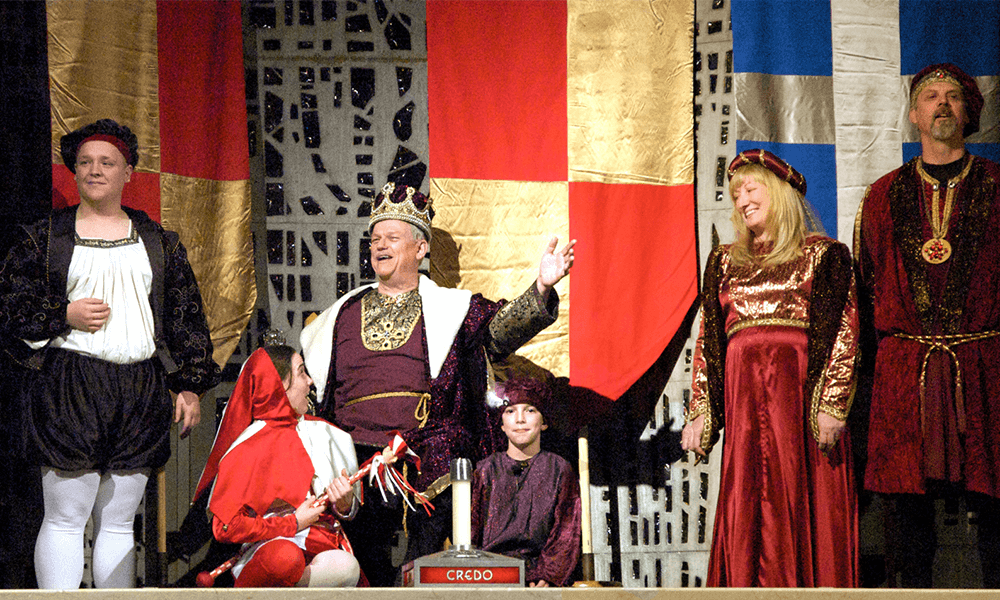 The first image here is from the festival in 2010. The image shows a close up of King Wenceslas at the ending of the Boar’s Head processional. As the choir sings out Master’s in the Hall, the King welcomes the lords and ladies down the aisles as they greet him and assemble on stage by his side. 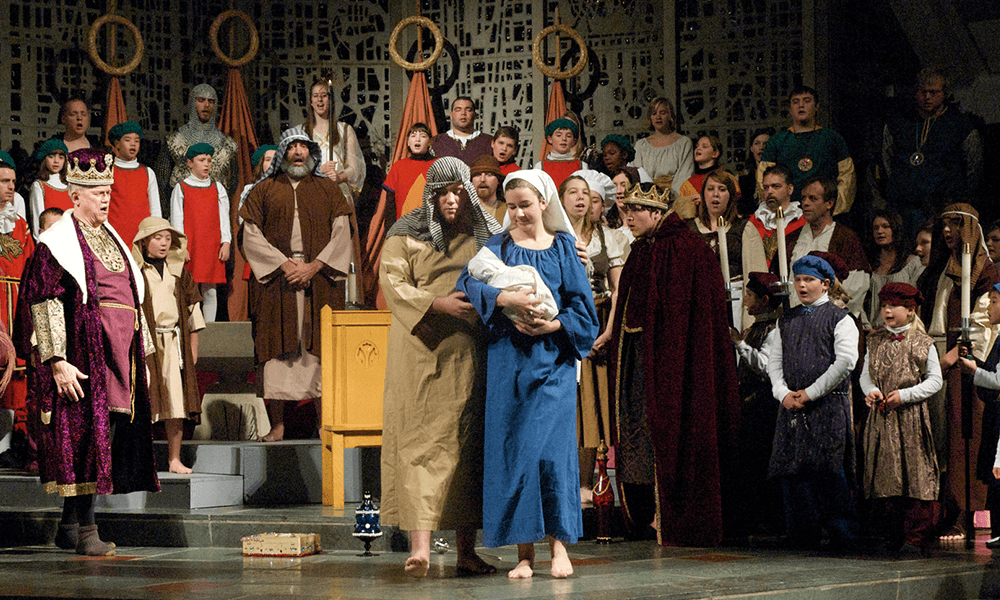 The next moment is from the festival in 2014. Skipping ahead in the pageant as it would have been shown, we see the ending of the festival where Mary, Joseph and baby Jesus are surrounded by the entire cast of the show: Shepherds, wise men, angels, lords, ladies, and servants all celebrating the newborn King. 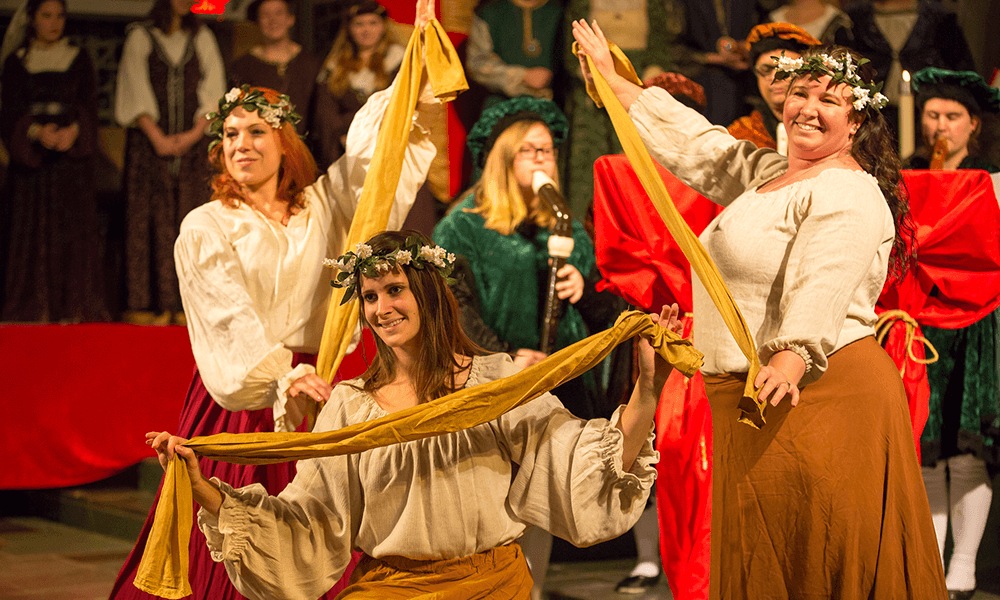 Looking at a flashback from 2015, we see the dancers that grace the audience with their talents as the wooden flute ensemble plays behind them. It’s always fun to see the cast interact with the audience. From wassailers to children with cookies to the lords, ladies, shepherds, kings and angels that come streaming down the aisles throughout the show. The cast is full of college students, community members, and school children; Boar’s Head is really a multi-generational experience for us all to enjoy! 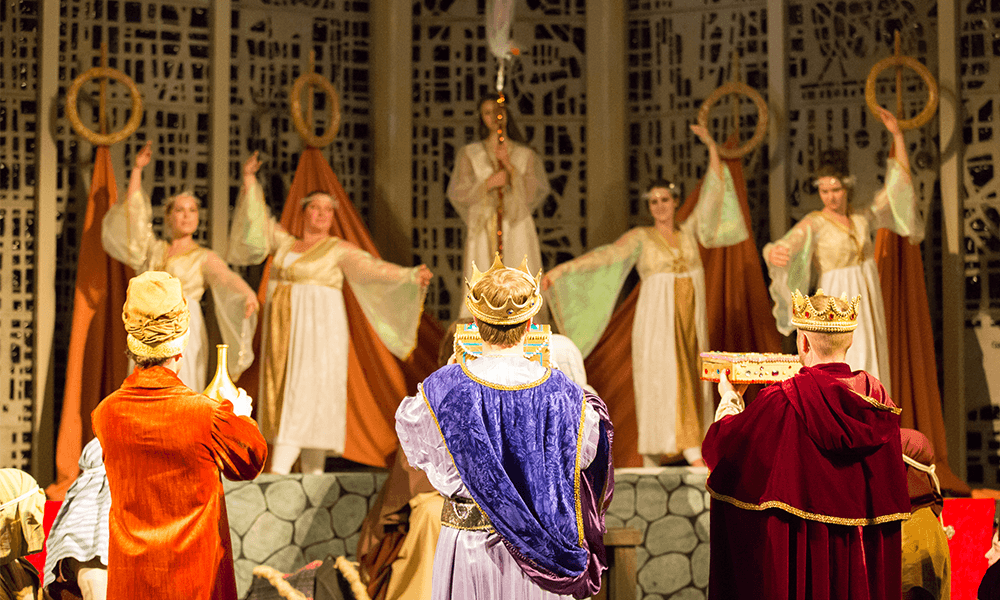 The next memory is from 2016 where we see the three kings presenting their gifts of gold, frankincense and myrrh to the Holy Family at the front of the Chapel. After the three kings come down the aisles singing Kings to Thy Rising, they find themselves at the feet of Jesus and bow before him. The choir then chimes in with the lyrics “fall on your knees” as the entire cast bows before the King of Kings. 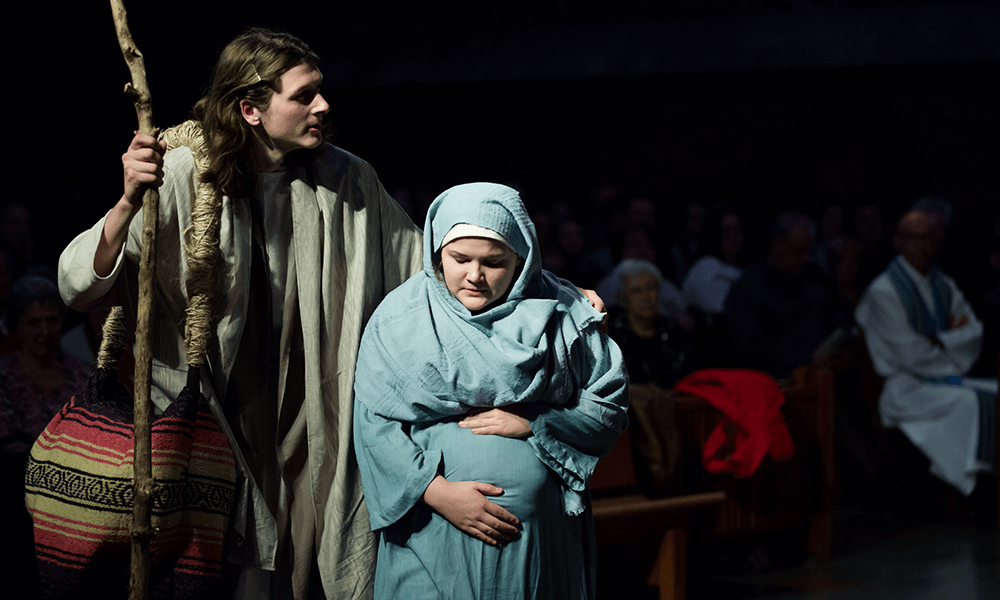 In 2017, we catch a close-up photo of Mary and Joseph as they walk quickly through the Chapel looking for a place to rest so that Mary may give birth. The audience gets a close picture of the real pain that Mary feels even though she is to give birth to a Divine Child. 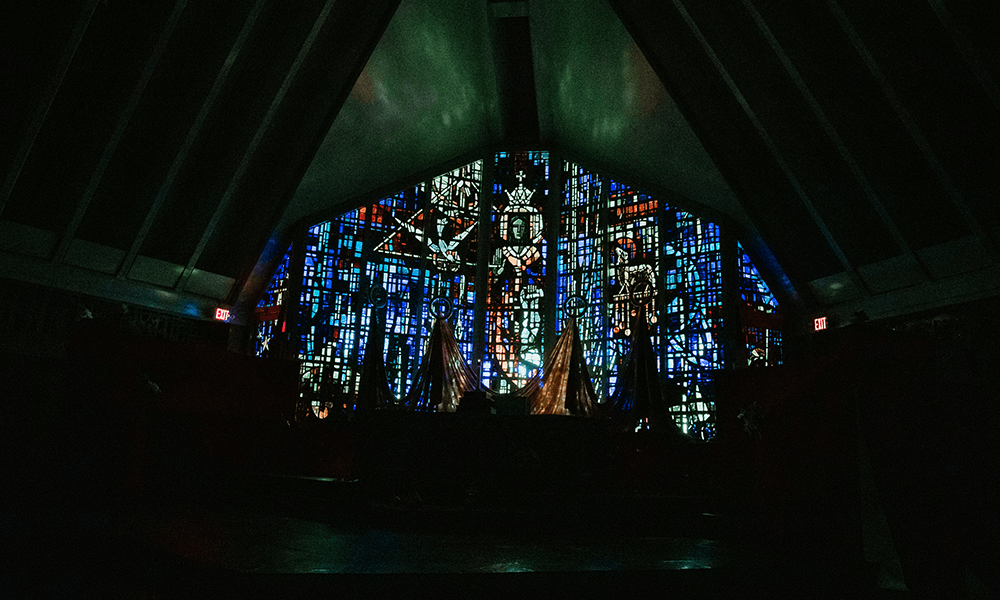 One of my personal favorite moments of the entire pageant happens at the very end. In 2019, we see an image of the stained glass in the Chapel that is lit up after the song Oh Come All Ye Faithful is sung by the entire audience, cast and choir.

Hopefully you have enjoyed taking a walk down Boar’s Head recent-memory lane, as many of you may also do around the dinner table and in your living rooms this weekend.

As a senior at Concordia University Ann Arbor, I definitely will miss performing in my final Boar’s Head as a student. However, I am given hope by the fact that this time next year, I will have a chance to come back as an alumni and sing in the opening show in 2021!

We hope to see you at many festivals, musical performances, and theater productions in the future! 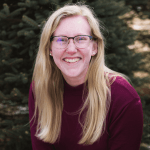